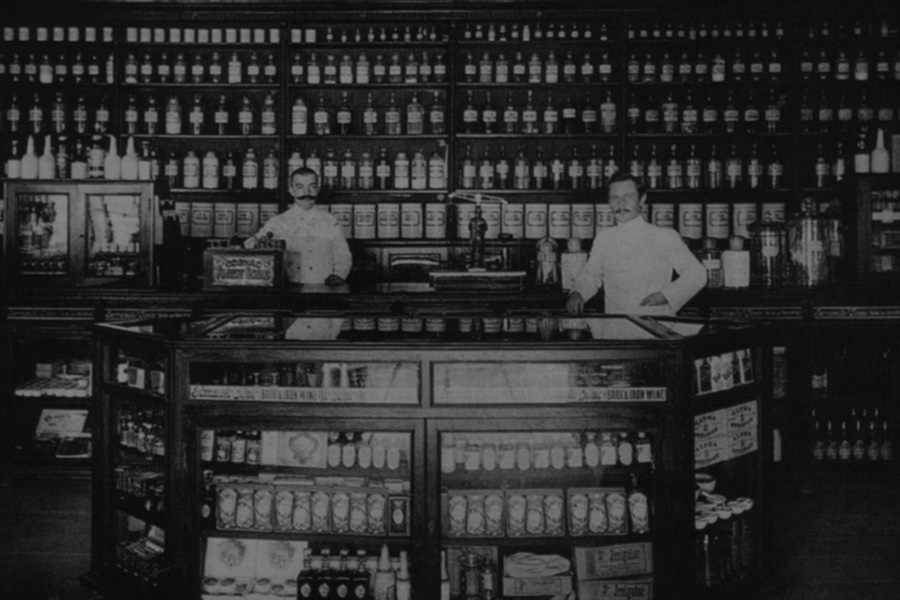 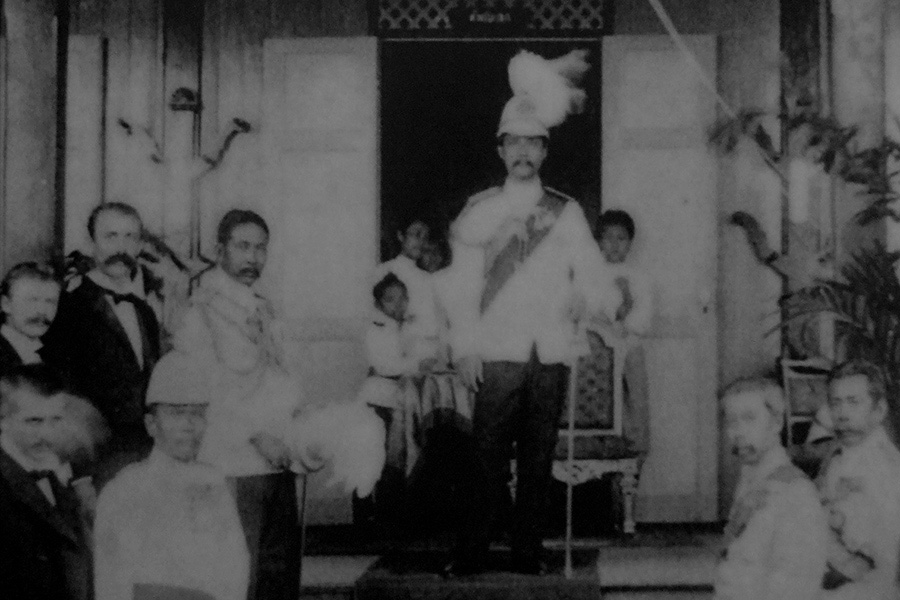 H.M. King Chulalongkorn on his way to accept the donation of the temple “Wat Moon Chindaram” by Mr. Erwin Mueller and Mr. Bernhard Grimm, which was built as a place of worship.

B.Grimm and the Snidvongse family built Rangsit canals, the largest irrigation system in Southeast Asia at that time. 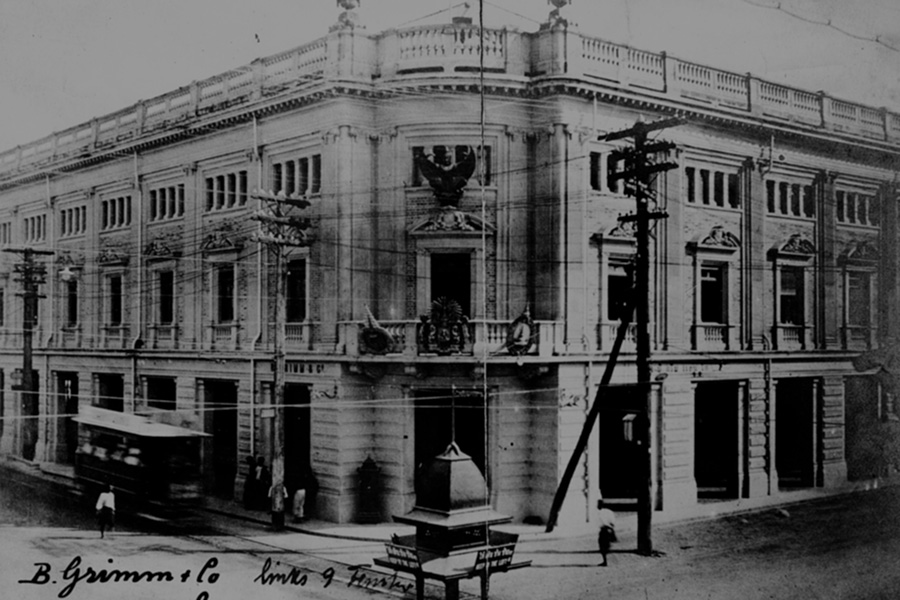 Mr. Adolf and Mr. Herbert Link at the construction area of the telegraph system built, owned and operated by B.Grimm. 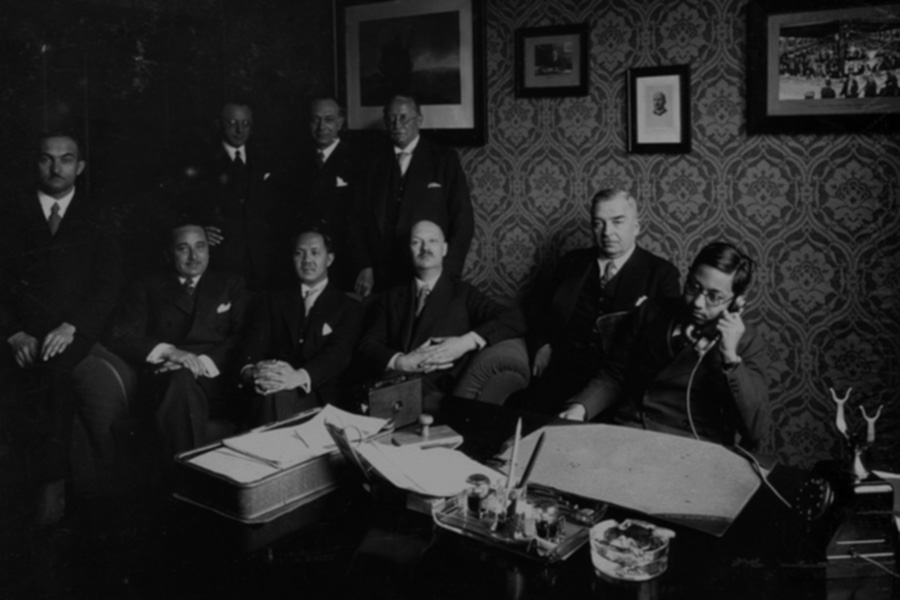 Prince Prem Purachatra with Adolf Link making the first phone call between Germany and Siam on a system supplied by B.Grimm. 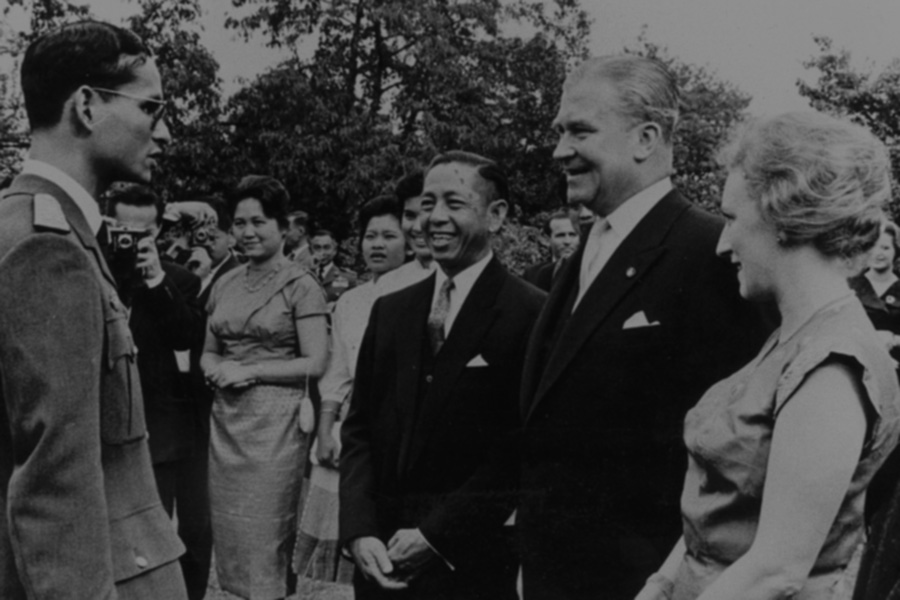 During the royal visit to Germany, H.M. King Bhumibol Adulyadej visited the residence of Dr. Gerhard Link, Consul General of Thailand, and Mrs. Monika Link, at Am Feenteich 14 in Hamburg. 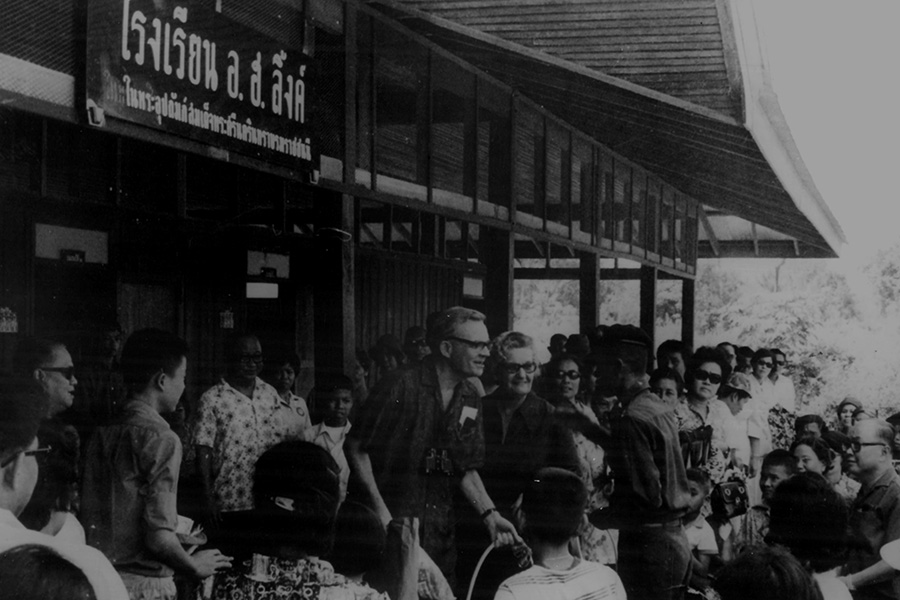 H.M. King Bhumibol Adulyadej bestowed upon Mrs. Alma Link the title of Khunying in recognition of her tireless work for various charitable foundations. She was the foreign lady to receive the honour. 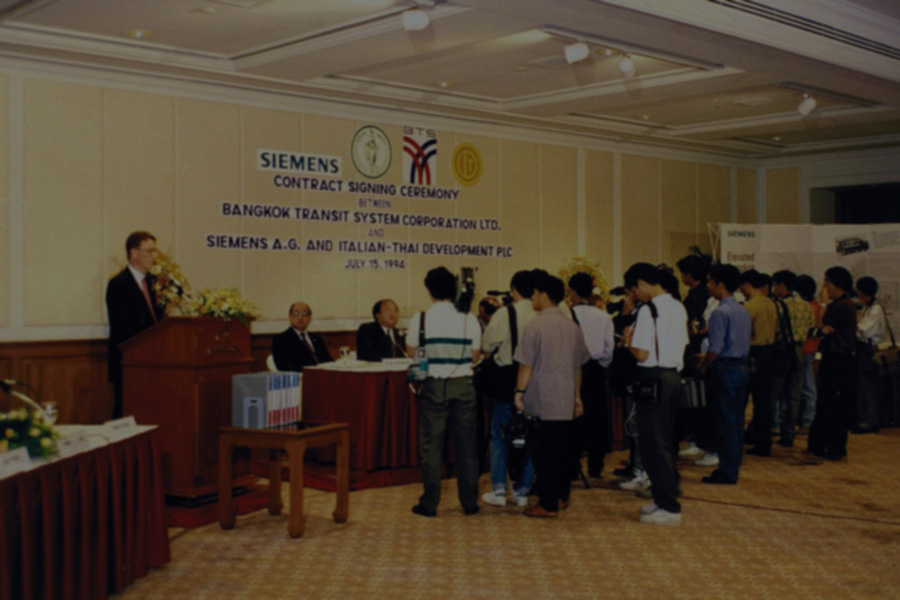 Harald Link during the contract signing ceremony with Siemens and Italian-Thai Development for BTS, the first sky train in Thailand. 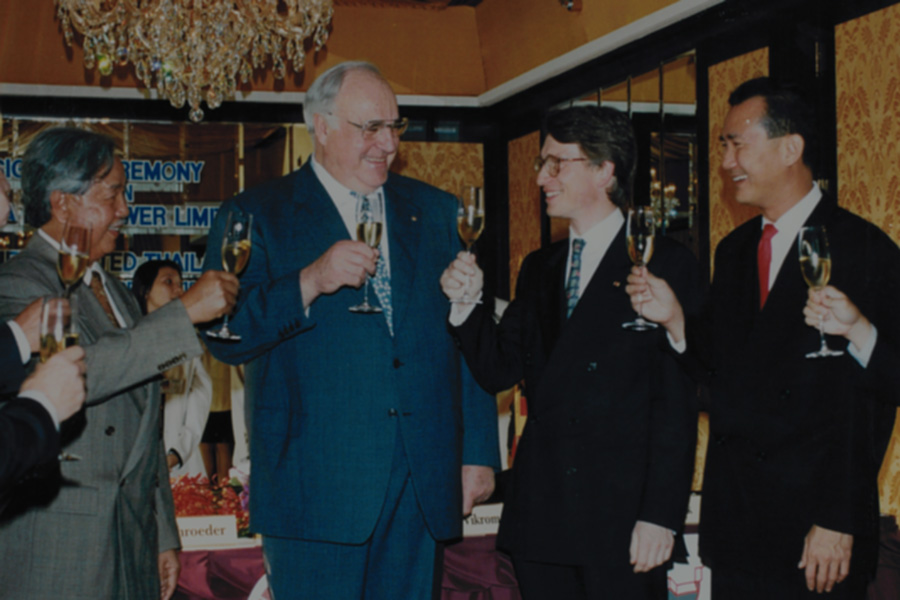 Amata B.Grimm’s contract with Siemens for our first power plant was the only purchase contract signing ever witnessed by Chancellor Helmut Kohl, a German Chancellor in Thailand.


B.Grimm, now a multi business corporation active in the fields of energy, building and industrial systems, healthcare, lifestyle, transport and real estate, has been the oldest infrastructure developer in Thailand since the late 1800s. During that time, the company joined with the Snidvongse family to build Asia’s largest infrastructure project, the 1,500 km Rangsit canals, having obtained concessions to sell th­e land adjoining the canals for agriculture and settlements. Later, in 1907, King Chulalongkorn, HM King Rama V, wrote in one of his letters about B.Grimm’s technological advancements in B.Grimm’s telegraph concession.

The B.Grimm Story began in Bangkok in 1878 when German pharmacist Bernhard Grimm and his Austrian partner, Erwin Mueller, started a chemist’s shop, the Siam Dispensary, on the Oriental Avenue off New Road. The shop, one of the earliest incorporated businesses in the country, prospered and it was soon appointed official pharmacist to the Thai royal family.

In 1903, Adolf Link was hired as a manager to help expand the growing business. A young pharmacist from Luebeck, the ambitious, visionary Link was in the right place at the right time to set the company on its future course.

After King Chulalongkorn returned from his grand tour in Europe, he began putting in place measures to modernize the country to bring it more in line with European nations.

Restart , the Great Depression and War

Needless to say, 144 years of business have not been without problems. Following the outbreak of World War I, Link, as a German national, had all his assets seized on orders of the British government and was sent with his wife, Erna, and two children, Herbert and Gerhard, to concentration camps in India. The Links had much credibility in Thailand and they knew the Thais hadn’t taken away their assets on their own initiative.

Therefore, they came home after the war ended in 1920 and settled back into life in Bangkok. In 1928, the strong relationship between B.Grimm and the Thai royal family was once again demonstrated when HRH Prince Bhanurangrsi built on his property the new premises for the company at Wang Burapha and Their Majesties King Prajadhipok and Queen Rambhai Brani presided over the opening of the new offices.

Herbert Link reopened the company in Thailand in 1949, while brother and partner Gerhard remained in Germany to help expand the B.Grimm name in Europe. In 1953, Gerhard Link was also appointed Thailand’s honorary consul and later its consul general in Hamburg.

Over the next decade, the brothers expanded   the  business  so that by 1964  it  included   divisions   dealing  with engineering and equipment for healthcare, power generation, telecommunications, air conditioning and mechanical engineering.

The company’s new office and warehouse on New Petchaburi Road was opened by HRH the Princess Mother in January 1967. In 1975, Herbert’s wife, Alma, was bestowed the title of Khunying by HM the King in recognition of her tireless work for various charitable foundations. She was the first foreign woman to receive such an honour.

In 1988, with Dr Gerhard’s son Harald at the helm, B.Grimm Group expanded further into power generation, manufacturing and real estate, and also forged joint ventures with some of the world’s largest corporations.

Harald Link, had joined his uncle Herbert in Thailand in 1978 to help manage the growing business. The younger Link came to Thailand with his bride, Princess Assunta von Liechtenstein. He says. “I arrived here at a time before globalization was changing the world.”

“The Infrastructure in Thailand was also changing, which allowed the company to expand more into the manufacturing and infrastructure side. We also established many joint ventures with companies for which we were acting as distributors such as Carrier, Siemens, Merck, Carl Zeiss, KSB, Urgo, MBM, and three-wheeler manufacturing.” explains Mr.Link. In 1992, the company built new factories and work also began on another new head office. The building was named after Dr Gerhard Link who passed away in 1995. Soon afterwards, B.Grimm expanded into power generation, bio-diesel production and the lifestyle industry.